St. Peregrine Laziosi started as a rebel and enemy of the church in his hometown of Forli, Italy. The pope sent Philip Benizi to the city as a peace ambassador, but Peregrine assaulted him. The rebel became remorseful afterward and asked for his forgiveness. He renounced his ways and became a priest. St. Peregrine is known as the patron saint of people with cancer, foot conditions, and other incurable diseases after a cancerous growth in his foot disappeared overnight after prayer. He reportedly cured other people throughout Forli after that. Our line of St. Peregrine patron saint medals serve as holy reminders of this beneficent friend that we have in heaven. 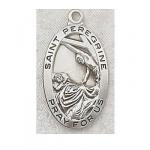 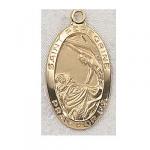