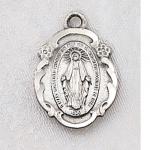 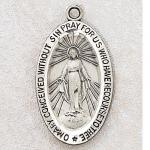 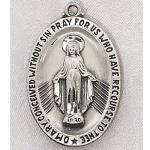 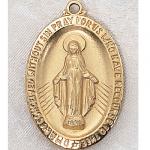 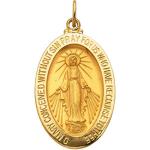 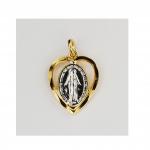 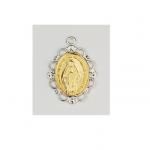 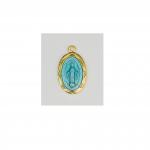 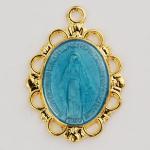 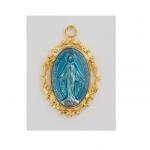 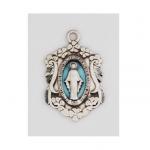 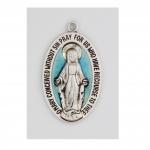 The Miraculous Medal is a medal, the design of which was originated by St. Catherine Laboure following her apparitions of the Blessed Virgin Mary in Rue du Bac, Paris, France, and made by goldsmith Adrien Vachette.

Catherine Labouré stated that on 19 July 1830, the eve of the feast of Saint Vincent de Paul, she woke up after hearing the voice of one child calling her to the chapel, where she heard the Virgin Mary say to her, "God wishes to charge you with a mission. You will be contradicted, but do not fear; you will have the grace to do what is necessary. Tell your spiritual director all that passes within you. Times are evil in France and in the world."

On 27 November 1830 Catherine reported that the Blessed Mother returned during evening meditations. She displayed herself inside an oval frame, standing upon a globe. She wore many rings set with gems that shone rays of light over the globe. Around the margin of the frame appeared the words Ô Marie, conçue sans péché, priez pour nous qui avons recours à vous ("O Mary, conceived without sin, pray for us who have recourse to thee"). As Catherine watched, the frame seemed to rotate, showing a circle of twelve stars, a large letter M surmounted by a cross, and the stylized Sacred Heart of Jesus crowned with thorns and Immaculate Heart of Mary pierced with a sword. Asked why some of the gems did not shed light, Mary reportedly replied, "Those are the graces for which people forget to ask." Sister Catherine then heard the Virgin Mary ask her to take these images to her father confessor, telling him that they should be put on medallions, and saying "All who wear them will receive great graces."